Tales of a Warming Earth, Edited

by admin
in Press Releases 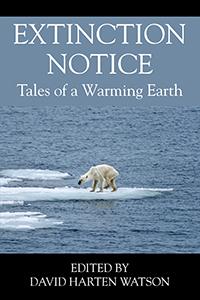 (EMAILWIRE.COM, June 06, 2022 ) Denver, CO and Newark, NJ  Silver Sword Press is pleased to announce the release of Extinction Notice: Tales of a Warming Earth, a collection of short stories edited by award-winning author David Harten Watson. A diverse group of talented authors from around the world have combined their work to draw attention to climate change with 41 science-fiction cli-fi stories that will entertain and thrill readers.

Global warming is real. Its caused by human activities and is a serious threat to our planet. And science fiction is the best way to draw attention to it. With the speculative fiction in Extinction Notice: Tales of a Warming Earth, editor David Harten Watson has gathered 41 stories from talented authors on four continents that will hold readers of all ages to the very last page.

Extinction Notice is packed with everything from humor and political satire to romance and horror, even poetry and songs, all with at least a dash of science fiction. These speculative fiction stories illustrate, in a highly entertaining way, what sorts of horrible calamities can happen in the future if humans dont act soon to stop global warming. While some of the stories show the disastrous effects of climate change, others provide examples of ways to mitigate climate change and make the future of our planet more livable.

Much of the humor and political satire in the book come at the expense of the Trump family, which will find itself viciously but humorously skewered in such delightful parodies as the song Donald, the Crooked President, sung to the tune of Rudolph, the Red-Nosed Reindeer; the near-future sci-fi story Terraforming Earth, about what would happen if Donald Trump had won a second term by colluding with another hostile foreign power (not Russia this time, but aliens) then passed down the presidency to his son Donald Trump Jr.; The First Man, a story about Jared Kushner as the bumbling, hapless first man while Ivanka Trump is president of the United States; and the dystopian story Breeders, set in a future where history books refer to the twice-impeached former president as Traitor Trump.

Profits from sales of Extinction Notice will be donated to environmental charities, which is sure to further enrage Donald Trump by thwarting his personal vendetta against wind turbines.

Learn more about the author at www.davidhartenwatson.com.

At 516 pages, Extinction Notice is available online at Amazon and Barnes and Noble for a maximum trade discount in quantities of 10 or more and is being aggressively promoted to appropriate markets with a focus on the fiction category.

About the Author: David Harten Watson, award-winning YA fantasy novelist, is also the author of the Magicians Gold series, including the award-winning Magic Teachers Son and its sequel Fortress of Gold. Raised in snowy Buffalo but currently living in New Jersey, Watson has degrees from Princeton, Canisius College, and Buffalo State College. Hes the organizer of the Woodbridge Science Fiction & Fantasy Writers Meetup, which he founded in 2008.

What is the high-tech rocket system the US plans to send to Ukraine?

Bot Security Market Witness the Growth of $983 million by 2026